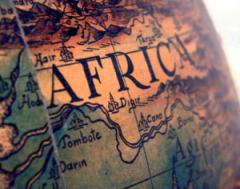 Knowing about African music history helps you better understand the continent itself. Because music is so deeply rooted in African culture.

Apart from Africans themselves, this knowledge is usually restricted to ethnomusicologists and historians.

On this page, I'll try to present it in easily understandable bits and in a way that's enjoyable for everyone.

Djembe drumming has gone through an enormous transformation under the influence of Western culture.
It has gained worldwide popularity, but unfortunately at the cost of a diluted tradition.

Learn about the djembe tradition in its original context: The African villages.

The traditional xylophone of the Mande people is part of the cultural identity of this West African ethnic group.

Myths and griots tell us about the origin of the balafon: The Sosso Bala with its supernatural powers! It played a major role in the founding of the Great Mali Empire.

African Balafon History Page
It's interesting to read, but wouldn't it be much cooler to actually experience the history of percussion instruments?