Traditional Kora Players - The Next Generation


You haven't heard Ba Cissoko yet, if you still think Kora music sounds too foreign and dusty for your taste: These young, hip kora players push traditional griot music to another level!


Some elders in Guinea don't approve of this modern use of their centuries-old
instrument. But they can't deny that the group exposes the Kora to a wider audience. Even we newbies to African music will enjoy their creations! 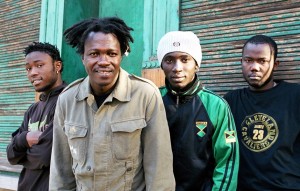 
Ba, the front man of the group, was born in Guinea into the Cissoko family, which sealed his fate: If you are a Cissoko, you are a kora player. As a typical teenager though, Ba had no interest in the music of his forefathers. He found the kora to be old and passé.

But because he wasn't interested in school either, Ba didn't do very well any any area of his life. As a last resort, the stubborn boy was sent to his uncle, a famous Kora player and teacher.

Under this man's patient tutelage, Ba finally started playing and appreciating the traditional instrument of his family.

Eventually, Ba was hired to play at a hotel in Conakry, where he started to play jazz, reggae and covers of Western songs.

One day, he met Frenchman Gilles Poizat, a known trumpet player, who wanted to learn to play the Kora. The two hit it off, and eventually formed a group with other musicians and dancers. "Tamalalou" was in demand in the live circuit and did very well until they decided to go separate ways in 1999.


Traditional Music With A Modern Push


Ba finally formed a group with talented kora players, which he simply calls "Ba Cissoko". Together, they give the family tradition and the unique sound of the kora a modern push:

The catchy rhythms and electric lines make these African tunes familiar enough for us Westerners to enjoy. Listening to these refreshing young guy is pure pleasure!

Although the group concentrates on the many live shows in both Africa and Europe, it was able to produce three excellent albums: Sabolan, Electric Griot Land

. They are available online. Check them out!


What do YOU think about Ba Cissoko?