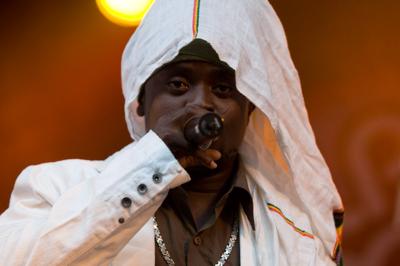 Black Prophet is a gifted African reggae singer from Ghana. His unique, harmonious reggae beat combined with a glamorous African cadence offers a very distinctive sound to his rhythm.


In 2003, Black Prophet made his first tour to Europe, where he played on various festivals in the Netherlands and Belgium. Since then, he has returned to Holland on a regular basis, backed by his Thunder Strike band. With his reputation growing further across continental Europe, he has been constantly invited to play at shows and festivals alike.

In 2007, Prophet's 'Doubting me' was named best reggae song of the year at the Ghana national Music Awards. A year later, he headlined the Oland Roots festival in Sweden, where he heralded several songs from his new album ‘Legal Stranger.’

A very humble artist with a modest upbringing, Prophet is considered Ghana’s most prominent international reggae export. Prophet was born in Accra, and at the tender age of seven, he had his first public performance with the Ola Williams band.

He released his first album ‘Chains’ in 1998. Shortly afterwards, he started performing as a solo artist under the name Home Culture. Like many great reggae performers he is deeply committed to his art, and power of spiritual music:

"The industry lives in me and I live in it. My music is to educate and elevate people from their slumber."

During the 2010 European tour, he will showcase his newest single "Good Feeling" produced by world-renowned producer Dean Fraser during his first visit to Kingston, Jamaica in 2009.