Ewe drumming video of a funeral in Atsiekpui, Volta Region of Ghana

Ewe drumming video of a funeral in Atsiekpui, Volta Region of Ghana 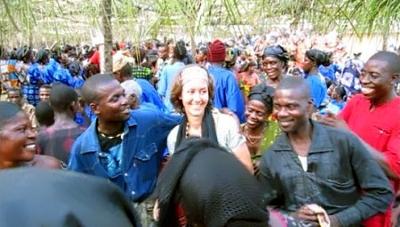 At an Ewe funeral in Atsiekpui, Ghana

In November 2009, I had to leave Ghana and cross the border to Togo because my visa was once again about to exire. I had promised to write about Ewe music in the next issue of my newsletter the African Music Explorer, but still needed pictures and videos. I could have just recorded a concert in Accra, but I really wanted to provide footage of an authentic, traditional event of the Ewe people.

So I planned to take advantage of the trip by visiting some Ewe drumming events in Lomé. I had already visited a culture group on a previous trip together with Mensah, but this time we had no luck: Nobody could direct us to a place where any drumming was going on. Rather frustrated and discouraged, we finally decided
to return to Ghana.

After a lot of begging at the border, the immigration officer allowed me to re-enter the country for another 60 days. But instead of heading directly back to Accra, we took a tro tro to Akatsi. The bus left the main road and passed a number of small, dusty Ewe villages sourrounded by the beautiful waterlands of the Volta Region.

In some places, we spotted people gathering under the trees and drummers getting ready to play. Every time, we just exchanged a look and sighed. We had been stuck in remote villages before, unable to find a bus, so we did not dare to get off to watch the drumming.

After the bumpy, but breath-takingly beautiful bus ride we arrived in Akatsi. With a last glimpse of hope, we asked one of our drum builders there about any drumming going on in the area. He stopped a taxi and a few minutes later we arrived in Atsiekpui, a tiny village hidden somewhere in the bush. The timing could not have been better:

The whole village was gathered for a funeral and the drummers getting ready to play. We asked the leader of the group permission
to take pictures and videos and just a few minutes later they started. In Accra, I had witnessed amazing Ewe drumming in churches, at funerals and concerts. But none of that compares to the experience in that Ewe village out in the bush!

While the villagers sang Agbadza songs, the cascet was brought out of the house and carried through the crowd to the burial site. As the singing continued, I worked my way closer to the drums. In exchange for a few dances with the friendly men and women around there, I got to record this wonderful video:

When we left, the festivities were still in their beginnings and probably lasted until the morning hours. I'll certainly remember
the people of Atsiekpui for many years to come.

Did you experience something similar on your own Africa trip?
Were you able to capture some great African music on camera? Please follow this link and take a few minutes to share your story:

Join in and write your own page! It's easy to do. How? Simply click here to return to African Music Videos, Pics And Stories.