Don't Miss Out On One Of
West Africa's Coolest Drumming Styles! 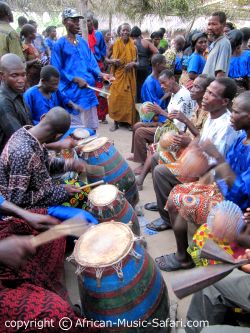 Have you heard of Ewe drumming yet? No?! Oh boy, you are missing out on one of West Africa's coolest drumming styles!

My first encounter with it was in a church in Ghana's capital city Accra: One after another, the long master drum sent rolling thunders through the building that made my bones shake and my jaw drop. How cool was that!

Nowadays, amazing neo-traditional groups incorporate this drumming style into their music and tour the globe. It is even taught in Universities all over the world.

But none of this comes close to experiencing it during a traditional event in an Ewe village!


Basically, the Ewe of both nations share much of the same traditional rhythms and dances. But the various villages like to compete against each other by improving their drumming. So, the same rhythm may be played slightly different in one village compared to another.


Excellent compilation of Ewe music!
Available on CD or MP3.

Some Ewe rhythms and songs are highly religious, especially the ones of the Yeve cult, that worships the God of thunder.

Other traditional pieces talk about the history and remarkable events of the Ewe people or just provide fun entertainment like Agbadza.

If ever you visit Ghana, take a trip to the Volta Region. With a bit of luck, you'll find a funeral, wedding, or other meeting going on in a nearby village. Those are the opportunities to witness authentic Ewe drumming.

But don't worry. This wonderful recording of Ewe music is available on the international market if you can't make it to Ghana.


The Ewe have one of Africa's most remarkable drums: the Atsimevu, a master drum with a length of 5 - 6 feet! It has to be leaned over to be played. But a typical ensemble consists of various drums and supporting instruments. Not all of them are used in every traditional piece though.

The drums are made like old wooden barrels and usually beautified and protected with colorful oil paint. Antelope skin is stretched over the mouth and attached to pegs: 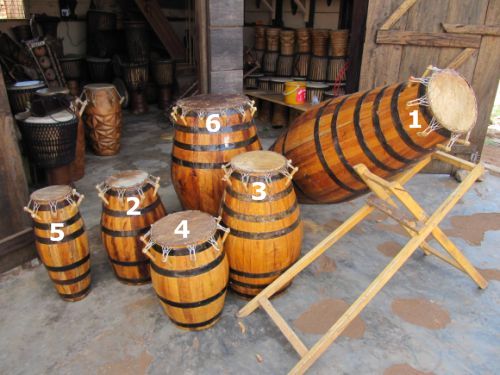 
What I like about these drums, is that the Ewe sometimes think of them as a family:

Want To Own
An Ewe Set?

Ewe drums are a very cool addition to any percussion group.

If you are interested, I can link you up with a trustworthy exporter of Ewe drums in Ghana.


In addition, these two idiophones are always present: the Gankogui and the Axatse.

The "character" of each "family member" even becomes obvious in what's called:


Most African languages are tonal. In a tonal language, the "melody" of a word is just as important as the word itself. This is why many African instruments can actually speak the people's language by playing different sounds at different pitches.

So, what you think is just a rhythm, is actually a little conversation between the members of the drum family. A great example of this is the war dance called Agbekor:

But the mother, Kidi, does not want to see war. She says:

The twin brothers pay her no mind and encourage each other to go on. Kroboto says:

Gbedzi ko ma do
I will die in the bush, at the battlefield.

and Tototzi supports him with:

Koko dzi
For sure!

The dancers follow the father's words and carry through the fight.

that I found the meaning of this drum dialogue. Learning about such things makes listening to Ewe drumming even more interesting!

But even with no deeper knowledge about African drumming, Ewe drumming is amazing to watch and never sounds monotonous. And if you learn to play yourself, you'll face a fun challenge of polymeters and cross rhythms!