The Gankogui
An African Bell With A Guiding Role 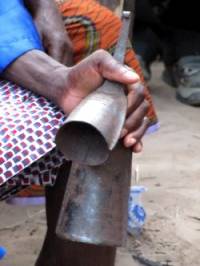 The Gankogui is an African bell. This simple percussion instrument is made of forged iron and comes in various sizes.

When struck with a wooden stick, it can produce two sounds: "gang" and "gong". Doesn't seem all that interesting? Kids' stuff? If you knew Africa a bit, you'd be sure: There must be more to it! And there is, of course. But first things first:

The Ewe are a West African tribe. They mainly live in the Volta Region of Ghana and parts of Togo on the other side of the border.

The Ewe are very famous for their music: Ewe drumming is actually taught in Universities all around the globe. In an Ewe ensemble, the musicians use various types of drums, depending on the piece they play. But one small instrument is always present: the Gankogui.

The Backbone of the Ewe Ensemble

The bell usually plays a simple pattern. It repeats itself without changes throughout the whole length of a traditional piece. Now, this may seem easy - but it plays a very important role in Ewe music: 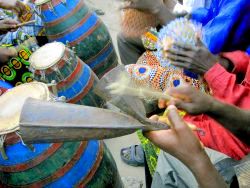 The bell pattern is the key to the rhythm. It provides the time line, after which every other instrument in the ensemble orientates itself.

But beware: Don't confuse the word "time line" with "main beat". The bell does not just mark the main beat of the rhythm. It's a bit more complicated than that:

Ewe drumming (like most African music) is polymetric. This means for instance: While the bell repeats a 4/4 pattern three times, the drums may repeat a 3/4 rhythm four times. So, instead of a common beat, we should rather call it a relation.

Obviously, the bell player must play very steadily to maintain the relationships between the various instruments. Otherwise, he will confuse the whole ensemble.

Other Uses and Purposes

In Ghana, one thing always amazes me: If you're looking to buy a bell, and you can't find it at the art market, you'll definitely find it where fetish and traditional medicines are sold.

Apart from entertainment, this musical instrument obviously serves other purposes as well. These are just some examples:

The Gankogui - An instrument the Ewe just can't do without.