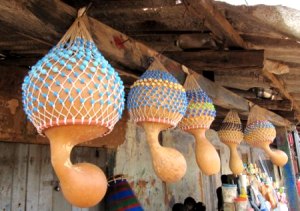 The Axatse is one of many types of gourd rattles in Africa. The material is easily available here and lends itself very well for musical instruments.

The makers spend hours working on the net that covers the hallowed-out gourd. One by one, they attach dried seeds to it (or also colorful plastic beads in recent years).

The result is a very beautiful, fun and versatile African musical instrument.

Origin of the Axatse Gourd Rattles

This shaker is an instrument of the Ewe people, who live in the Volta Region of Ghana and in neighboring Togo. It always accompanies traditional Ewe drumming ensembles.

Its Role in the Ensemble

The dry, high-pitched and pretty loud sound of this instrument drives and spices up Ewe music. It's rhythm repeats itself without changes during the whole length of a traditional piece and is closely connected to the bell pattern of the Gankogui. The role of this African rattle is to support and reinforce the bell, which provides the timeline for the whole ensemble. 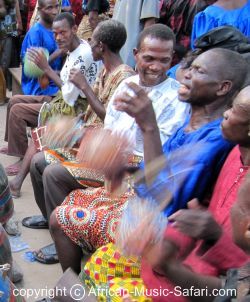 Axatse Players in an Ewe Ensemble

In an Ewe ensemble, about four or five rattle players are usually seated in a row in front of the drummers.

(I don't know if it's on purpose, but I noticed that it's usually older men playing this shaker. And they always look so stylish playing!)

Other Ghanaian tribes have discovered this Ewe instrument as well. But they usually just mark the beat by shaking the rattle in the air or by holding the handle in one hand while pulling the net with the other.