Miriam Makeba was not only the first African singer who gained popularity in the West. She was also a fighter against the colonial oppression in her country - she was a witness to the re-birth of her continent - she was and will always be: Mama Africa.


Miriam Makeba and her Role in Democracy

On March 4, 1932 she was born into a poor family of the Xhosa and Swazi tribes in South Africa. Like many other African nations, South Africa was colonized by the Europeans. Under the Apartheid regime, the natives were strictly separated from the white population and discriminated in every possible way.

1959, Miriam left to Europe and moved on the to USA, where her music became very popular. When she wanted to return home a year later, the South African government canceled her citizenship and forced her to live in exile for 30 years. 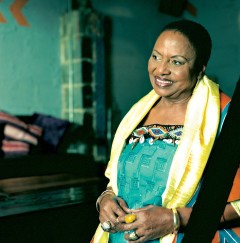 During these years, many African nations were fighting to re-gain independence. Miriam assisted in several presidential campaigns and sang at the celebrations of many newly independent African countries.

Two times, Miriam spoke at the UN on behalf of the South African people, who still struggled under the oppression. Being an African celebrity in the West, she was able to let the world know about the problems of colonization. That is how she became "the voice of Africa".

Miriam sang for justice and humanity until the last minutes of her life. At the age of 76, she collapsed during a concert in Italy and passed away in November 2008.

Like all black South Africans, Miriam had suffered under the racist Apartheid regime. Naturally, her music reflects what her people were going through. That is why many of these so-called protest songs got banned by the government.

Apart from English, Miriam sang in French, Spanish, Yiddish etc. and in various African languages. But her most significant albums are those in her mother tongue Xhosa, like Pata Pata or Sangoma.

Miriam's albums are a treasure of African history. They keep the memory of Mama Africa alive and remind of Africa's fight for independence:

What do you think about Mama Africa?