One Of Africa's Central Instruments 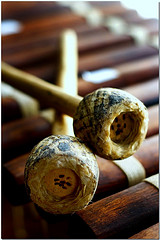 Image is a courtesy of
"emaho" on flickr.com

The wooden xylophone is one of Africa's most prominent instruments and can be found in all parts of the continent. This popular percussion instrument is deeply rooted in the different cultures.

You are about to discover a surprising variety!

At first, their music may sound unusual to a Western ear, because the African scales and techniques are different from what we are used to.

It is worth diving into this marvelous world. After all, the history of the xylophone of the West includes these African ancestors.

African xylophones come in many different sizes and styles. Generally though, fire-dried wooden bars are mounted on a bamboo frame with the help of leather strings.

Most often, some sort of resonator achieves a fuller and louder sound. This is usually done with calabashes of various sizes attached under the bars, but can even be just a hole dug in the ground.


The name Balafon commonly refers to the traditional xylophones of the Malinke people, which are spread across several countries of West Africa, such as Guinea, Mali, Senegal, Gambia, Ivory Coast etc. 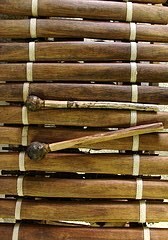 Image is a courtesy of
"Samm Bennet" on Flickr


The term "balafon" comes from the Malinke language and means "playing the bala instrument". So actually, only "bala" refers to the instrument itself.

You'll find different versions of this popular percussion instrument among the Malinke peoples. For example:


Because this Malinke term is well known in the West, we often assume that Balafon is the name for all African xylophones. In reality though, there is a large number of other African tribes with long traditions, that are just as interesting and important.


Did you know that the Greek word "xylophone" means something like "wooden voice"? That's exactly what it is for the Sambla people in Burkina Faso:


What would you say if you could speak through your instrument?


The droning sound of the Gyil in Ghana immediately got me hooked: I took lessons. But distracted by running children, drying laundry, clucking chickens and Muslim prayer calls I admit I didn't advance all that much.


No worries, your speakers work fine. The Gyil actually sounds that cool!


The Timbila music of the Chopi tribe is the recognized national music of Mozambique. It is one of the most spectacular and complex artistic expressions to be found on the African continent.


This is a performance of an 11-piece orchestra. Image how it must sound when 30 of these amazing musicians play together!


Above four examples just give a taste of the rich variety of wooden xylophones in Africa. In reality, I could add a long list of other ones played by the many different tribes on the continent.

If you'd like to keep exploring on your own, here's something to start with:

to meet other
open-minded and
caring people!

alerts you monthly of
updates and specials
for FREE. Subscribe: